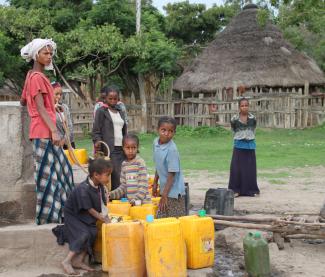 Nearly 20 years ago, the World Health Organization (WHO) recognized the risk soil-transmitted helminthiasis poses to women of reproductive age (WRA). Blood loss from STH, particularly from hookworm infections, has been amply demonstrated to cause severe morbidity and exacerbate maternal mortality through anemia. As a result, WHO recommended, in 1994, that deworming of this risk group be part of STH control efforts.[1]

Children Without Worms (CWW) has helped expand global STH control efforts to include WRA. CWW has worked with the STH Coalition to make scale-up of preventive chemotherapy to WRA a focus of Coalition efforts (Figure 1). And as the STH Coalition secretariat, CWW is committed to serving as a thought leader and catalyst for removing barriers to preventive chemotherapy and fully operationalizing WHO strategy and guidance. These barriers include:

Despite these challenges, recent efforts demonstrate progress. WHO convened an expert meeting in June 2017 in Bellagio, Italy. The resulting Bellagio Declaration states, “Every girl and every woman of reproductive age who is infected with soil-transmitted helminths has the right to be treated.”

Furthermore, in September 2017, WHO issued a clear recommendation for implementing preventive chemotherapy for STH control in all risk groups including women of reproductive age.[3] WHO calls for treating non-pregnant and pregnant (after the first trimester) women and adolescent girls. The release of this guidance is an important step in eliminating STH-related morbidity in an estimated 688 million women in 102 countries, as WHO has long advocated.[4]

In November 2017, CWW Director, Dr. Rubina Imtiaz, co-facilitated a workshop with representatives from the scientific community, national NTD programs, and their NGO partners to discuss the feasibility of conducting preventive chemotherapy for WRA. The session highlighted the activities that Togo and India have initiated to reach women and girls. The Togo Neglected Tropical Disease Program has assessed disease prevalence and intensity of infection in this risk group, while India started national deworming in 2017, already reaching many of the targeted women and girls. “We hope this workshop stimulates further action to address both research and implementation priorities and challenges,” said Dr. Imtiaz.

To effectively reach this population, collaboration among partners and across sectors will be required. Preparatory work for preventive chemotherapy scale-up to WRA is underway. Effective STH control for WRA will be part of the post-2020 global WHO strategy. CWW and the STH Coalition will engage NGO partners that already serve WRA and identify additional partners and platforms needed to expand access to preventive chemotherapy for this important, but oft-neglected, risk group.