Continuing the War on Worms 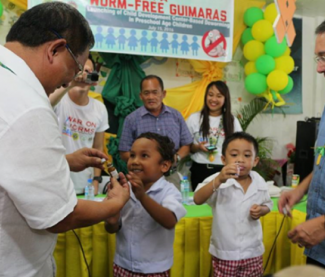 “People, parasites, and poverty have a thriving relationship” said Vicente Y. Belizario, Jr., MD, MTM&H, and when it comes to intestinal worms, where Belizario has dedicated more than 30 years of his career, this is clearly evident. Intestinal worms are parasitic worms that cause soil-transmitted helminthiasis (STH), some of the most common infections in the world and the most commonly neglected tropical disease (NTD) that routinely affects poorer populations due to lack of quality sanitation and water infrastructures. Children Without Worms (CWW) works to control and eventually eliminate these infections, but it takes a collaborative effort of partnerships across the scientific and implementation sectors to get the job done, and Belizario has been an instrumental part of that collaborative effort. As a former STH Advisory Committee Chair and member, Belizario recently stepped down from the Committee to take on a new role as the Dean of the College of Public Health, University of the Philippines, Manila. In recognition of the contributions he has made to the STH community and as a partner to CWW, we catch up with him for some reflections on his time in the Committee and his thoughts on the current status and future of the War on Worms.