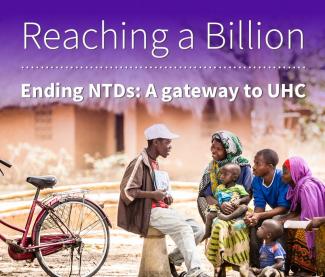 With the 2012 launch of the London Declaration on Neglected Tropical Diseases (NTDs), stakeholders from across the globe resolved to control, eliminate, or eradicate 10 NTDs by 2020. As outlined in the recently-published London Declaration’s 5th Progress Report, those efforts have surpassed a major milestone: delivery of treatment, for at least one NTD, to more than 1 billion people in a single year.

Despite immense challenges, tremendous progress has been made against soil-transmitted helminthiasis (STH), with STH control programs alone treating over 531 million children in 2016. For the third year in a row, the STH community earned an overall green score – the highest possible – on the Scorecard. The STH community also earned individual green scores on three out of four milestones: program support, drug requests filled, and coverage/impact.

The program support milestone reflects the commitment of the STH Coalition, a multi-sectoral group of more than 60 partners, to accelerate global progress in combating STH. Among those partners are Johnson & Johnson and GlaxoSmithKline[1] whose donations of deworming drugs have been the enabling factor for the drug requests filled the category. By collectively distributing deworming drugs to an almost mind-boggling number of at-risk people in 2016, ministries of health in recipient countries made the green ‘coverage/impact’ score possible.

Still, as indicated by a yellow score in the research category, there is room for improvement. At its annual meeting in November, the STH Advisory Committee, the scientific and technical body that guides the work of the STH Coalition, compiled recommendations for addressing a list of current operational research (OR) gaps. Committee recommendations called for OR to pilot a comprehensive monitoring and evaluation (M&E) framework tied to defined STH endpoints, and development and field-testing of improved diagnostic tests to measure progress toward those endpoints. To learn more about the operational research gaps and to read the full STH Advisory Committee report click here.

[1] GLAXOSMITHKLINE, GSK and the GSK Logo are trademarks of the GSK group of companies and are used with the permission of GSK.