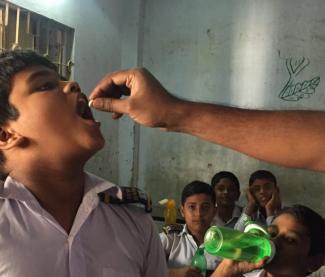 News reports swirled before Thanksgiving that a North Korean defector had 10-inch long parasitic worms (Ascaris lumbricoides) removed from his stomach after fleeing to the south. While shedding light on the poor health conditions in the country, the story also brought attention to a significant global health problem that affects as many as 1.5 billion people and causes a host of negative health effects, especially in children.

The Task Force’s Children Without Worms (CWW) program is working with partners around the world to eliminate intestinal worms – also known as soil-transmitted helminthes (STH) – as a public health problem.

In this question and answer, CWW Director Rubina Imtiaz, MD, shares her thoughts about what the North Korean defector’s infection indicates about conditions in the impoverished country and the prospects for eliminating STH as a public health problem worldwide.

You saw reports that parasitic worms were found in the intestines of the North Korean soldier. What do you think?

It doesn’t surprise me, but it’s interesting that the North Korean soldier has focused attention on this global health issue. STH is the most common infection in the world. These infections are indicators of impoverished and marginalized areas, and North Korea is far from alone in that.

Worms enter the body when people ingest them in food or walk bare feet in contaminated soil. The worms’ eggs then mature into adult parasites within the infected individual and get passed in the feces of the infected person, which end up in the soil if the person defecates in an open field or if human waste is used as fertilizer. When produce grown in contaminated soil gets eaten unwashed or improperly cooked, it can transmit STH. People touch the soil and then eat with the same unwashed hands. That is how the worms get transmitted. But the real reason for STH is lack of sanitation infrastructure. In many countries where you see STH, toilets and running water are in short supply and ‘night soil’ fertilization is an agricultural practice.

Is STH a problem only in poor countries?

The bulk of cases are found in poor countries but you also see instances in the poorer parts of developed countries including the United States. Many years ago, I was in Mississippi when I saw a surgeon remove hookworms from a patient. Just a century ago, hookworm was still a pervasive problem in the South. But deworming campaigns and improvements in sanitation largely eliminated the disease as a public health problem by the early part of the 20th century. This year, Alabama reported a resurgence of hookworms in one of its poorest counties.

Can STH do much harm?

These infections can go unnoticed for years. Heavy infections (a greater number of worms) can cause a range of acute health problems including intestinal blockage, diarrhea and acute abdominal pain. In extreme cases, it can cause an abdominal rupture that requires surgery.

The most significant damage from STH is malnutrition.  Women and children are particularly hit. It robs pregnant women of their nutrition, causing them anemia and stunting the physical and mental growth of their unborn child. Lactating mothers are unable to feed their infants because the parasites have devoured the food. It weakens people and robs them of their ability to be productive.

What is CWW doing to combat these infections?

I like to say we are like WD-40 because we grease the wheels that help make deworming programs run. We work with countries and partners to build their capabilities to effectively deliver a comprehensive package of interventions. We also serve as the secretariat or hub for the STH Coalition, a partnership of more than 60 organizations working to expand and improve existing efforts.

For most people, STH is easily preventable and treatable with deworming medicine, but it cannot be eliminated until other changes are made. For example, we need to improve how we measure the effectiveness of deworming programs. In Bangladesh, we have launched a pioneering study with the government to survey six districts for STH prevalence and intensity (the number of eggs in a person’s stool). We are hoping those findings help strengthen our approach to eliminating STH as a public health problem in the country and elsewhere.