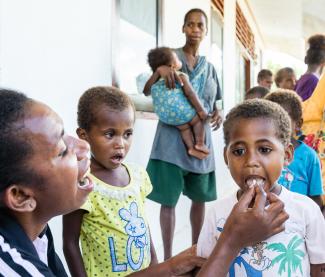 A groundbreaking new test to detect drug resistance in intestinal worms is expected to be ready for proof of concept testing early next year. This test could help large-scale treatment programs identify resistance before it takes hold within a population.

Intestinal worms cause soil-transmitted helminthiasis (STH), a neglected tropical disease that affects more than a billion people in some of the poorest and hardest to access areas of the world.

The Task Force program Children Without Worms (CWW) has been working with partners over the last year to spur the development of the resistance test, which will be the first of its kind for humans. Similar tests exist for identifying drug resistance in livestock with STH.

The test could be a game-changer for STH control and elimination as it uses new technology to identify specific gene mutations in human parasites that cause drug resistance. A distinguishing feature of this test is its ability to scale up and test large numbers of samples simultaneously at relatively low cost per sample.

CWW Director Rubina Imtiaz, MD, said she’s excited about the test because it is both highly sensitive and practical in its applicability to a wide variety of settings. “Labs in most parts of the world should be able to use the tests to detect resistance and help programs with high deworming drug treatment coverage deploy effective interventions,” she said.

Although there are currently few reports of STH drug resistance in humans, Imtiaz said that situation could change quickly. “Prolonged treatment with the same, single drug has caused resistance in almost every other public health program such as those targeting malaria, TB, etc. That can happen with STH as efforts intensify to control and eliminate it.”

The decision to develop a test that could easily be used by program implementers was the result of a series of discussions convened by CWW, which is the hub for the STH Coalition and STH Advisory Committee. Over the past year, the committee has called for donors to support new research in this area, and the coalition – a group of more than 60 organizations working on STH globally – has brought together scientists to collaboratively address the issue. Following these meetings, a few organizations decided to forge a partnership to advance much needed research in the area of drug resistance and STH.

John Gilleard, PhD, a veterinary parasitologist at The University of Calgary, who is developing the test with funding from the Bill & Melinda Gates Foundation, said it is built off one that was originally developed for animal parasites. “We are transferring the large amount of research already performed on livestock parasite drug resistance to humans and that is informing this test and approach,” he said.

University of Georgia veterinary parasitologist Ray Kaplan, PhD, who’s also involved with the initiative, said there’s a window of opportunity before drug resistance sets in and thwarts the success of mass drug administration (MDA), which has proven to be an effective mechanism for STH control. “Having a tool that will allow us to map resistance in its emerging stages and identify associated risk factors is critical for the long-term success of MDA.”

Both Kaplan and Gilleard said CWW provided an invaluable mechanism for bridging their veterinary scientific research with human STH programs, which will ultimately use the test. “We tend to operate in our silos and CWW does a great job of facilitating a multidisciplinary approach,” said Gilleard. “If you don’t link up people in the right way and effectively, it becomes hard to make progress.”

View original publication of this story