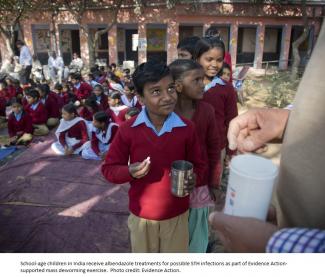 Parasitic worm infection, or soil-transmitted helminthiasis (STH), is one of the most prevalent causes of illness among the world’s poorest and most vulnerable populations, especially children. Close to a quarter of the world’s population is infected with at least one STH species, and globally an estimated 870 million children are at risk of infection[1].

Intestinal worm infections cause a range of symptoms, including intestinal blood loss resulting in anemia, and impaired cognitive and physical development. Indeed, by interfering with nutrient uptake, worm infections undermine children’s health and ability to learn, preventing them from reaching their full potential.

Mass drug administration, long the cornerstone of STH control efforts, is the use of deworming drugs to treat an entire population in a given geographic area, regardless of each individual’s infection status. Deworming drugs are safe, efficacious, and available free of charge for school-age children through generous pharmaceutical donations coordinated by the World Health Organization (WHO). Treatment reduces morbidity, particularly in heavily-infected children, and is strongly associated with improved health, learning potential, and long-term productivity. However, to ensure these positive effects, treatment coverage must be sufficient and occur regularly.

The good news is that increased investments in STH control are paying off. Between 2011 and 2015 (the most recent year for which data is available), treatment coverage doubled among school-age children, reaching 63%.[2][3]And that progress has put within reach the target set by the World Health Organization: 75% treatment coverage for school-age children globally by the year 2020.

STH Coalition partners are contributing to this work in a variety of ways. In collaboration with country governments, they’re supporting school-based treatment programs, integrating deworming with other NTD treatments, and, in the case of preschool-age children, combining deworming with the provision of nutritional supplementation.

Still, lest this good news lead to complacency, consider that measures of progress at a global level mask variability among and within countries. Some countries have yet to scale their treatment programs to all at-risk areas, while others have fallen short of their coverage targets. In addition, many deworming treatments are effectively provided through the administration of albendazole as part of treatment for lymphatic filariasis (LF), given the overlap in drugs between the two diseases. Many countries are successfully reaching their LF elimination goals, meaning that as LF efforts stop, treatment gaps may emerge.

It’s imperative that these gaps are immediately addressed, and three key objectives can help us, as a community, maintain focus on the outcome of interest: reduced morbidity from worms for those who stand to lose the most when infected.

We propose that a framework for quality programming should include:

Aligning partners on the framework their potential related roles can help to keep STH control on track to meet the 2020 goals – and most importantly to ensure that at-risk children receive the treatment they deserve to lead healthy, productive lives.